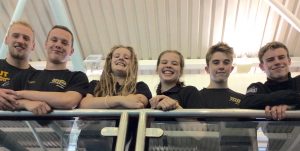 A record number of Carnforth Otters swimmers qualified for the National Summer Championships which is a great achievement for them and Otter’s Head Coach Mark Smith.

The Summer Meet forms part of a swimming competition structure in Great Britain whereby the top ranked swimmers in each event are invited to compete at the British Swimming Summer Championships.

The next ranked swimmers at English affiliated clubs are invited to compete at the English Nationals.

The rankings are on swimmers’ performances at level 1 meets between a qualification window which for Otter’s swimmers Ben Winterburn, Hannah Edwards, Alex Livingstone and Robin Austin coincided with their GCSE’s making their achievements all the more creditable.

Ben Winterburn started the week off finishing 13th in the 3k Open water championships and recovered well to take an excellent 9th place in the 1500m freestyle 2 days later. Ben also qualified in the 400m free and finished in 17th place. A great achievement for his first championships.

For Thomas Dugdale it was also his first Nationals and having only recently overcome a broken wrist put in great performances in the 50m and 100m butterfly to qualify for the final in both events finishing in 10th place.

Hannah Edwards narrowly missed out on qualification last year and was determined to perform well; she did not disappoint, finishing 10th in the final of the 200m breaststroke and 12th in the 50m breaststroke with a personal best time.

Robin and Alex have qualified for Nationals previously; this time Robin went in the 50m breaststroke and Alex improved on last year and qualified for 2 events, the 50m and 100m backstroke. Both put in strong performances and swam close to their personal best times, Robin finishing in 18th place and Alex 13th and 17th.

Josh Thompson qualified for both the British and English Championships but unfortunately suffered an injury which prevented him from competing in an Otters hat for the final time. Josh starts at Loughborough University in the new academic year and will be joining their elite swim squad. Josh will be sadly missed as he has been a fantastic ambassador for Carnforth Otters and a great role model for the younger swimmers. Everyone at Otters wishes him all the very best for the future.