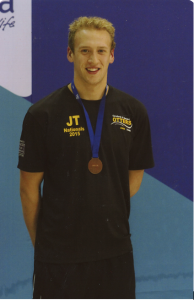 Pond’s Forge, Sheffield provided the backdrop for the National Championships in December, heralding the end of the short course swimming season.

Many of the Great Britain’s Olympic hopefuls were in action during the 4 days of very fast racing, where records tumbled on a daily basis. In this open age competition, everyone was competing for a top 20 finish in the heats and a place in either the A or B final.

Sophie Casson competed in the 400m Freestyle, clocking a solid time of 4.18.76, finishing in 26th position. Although slightly slower than her recent World Record breaking time, she had a great time catching up with old swimming friends from across the country.

Josh Thompson (17) was in action in numerous events, where he recorded several personal best times and reached 2 A finals and 2 B finals. In his first taste of racing finals at a senior level, Josh produced some outstanding performances, the highlights being a Bronze medal in the 100 IM with a PB of 56.00 and a 9th place finish in the 200 IM with PB of 2.02.91