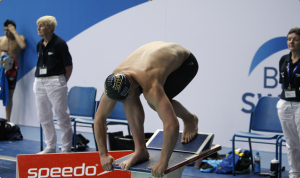 17 year old Josh Thompson has recently returned from Glasgow where he competed in the 2016 British Championships/Olympic Trials.
All of the senior athletes arrived with high expectations, hoping to get through to the finals and achieve a qualifying time for a place on the Olympic team travelling to Rio this summer.

Josh had a mixed week, disappointed by his times in his two Breaststroke events, which were quite a way short of his PBs. A very nasty finger injury a couple of weeks before the competition may have had an impact and the decision was made to withdraw from the 200 IM. However, being able to manage the highs and lows of swimming is absolutely crucial and Josh proved what a true competitor he is by brushing himself off then producing some very good swims in his three Freestyle events. With a time of 23.85 in the heats he got through to the junior final of the 50m Freestyle. An excellent swim of 23.79 saw him finish in 5th position in a race where all 8 swimmers were separated by a finger tip!

Swimming shoulder to shoulder with Great Britain’s top senior swimmers and experiencing a final in front of a packed and extremely noisy audience were experiences which Josh will take with him as he continues on his swimming journey- well done Josh!