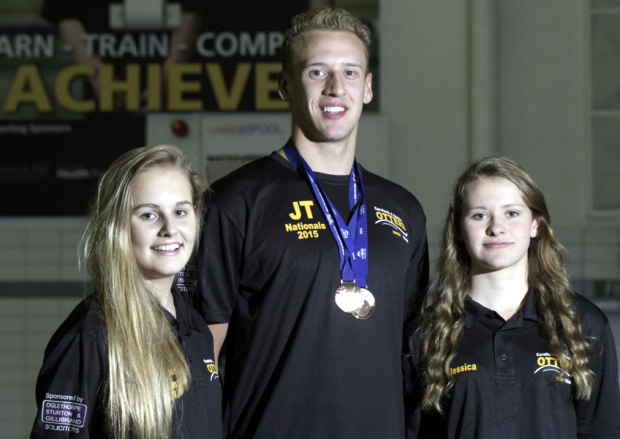 At the end of a long season, three swimmers from Carnforth Otters travelled to Pond’s Forge in Sheffield to compete at the National Championships, the highlight of the year where the very best of the country’s junior swimmers battle it out. This year’s new qualification format meant that the top 25 ranked swimmers in Britain in every event in each age group were invited to compete at the British Championships and the next 20 ranked swimmers in the home nations competed at their own national event.

Having trained hard and continually improved all year, 14 year old Aimee Banks qualified for the English Championships, the very first time she has qualified for a national event. Competing in the 50m Backstroke, Aimee soaked up the atmosphere and held her nerve to produce an excellent swim, finishing in 11th position overall (reserve finalist) with a PB of 32.59.

15 year old Jess Shatford managed to qualify for the 50m Breaststroke at the British Championships despite struggling with a knee injury for most of the season. Excited to be back at Pond’s Forge, Jess’s smooth style saw her finishing in 23rd position in a time of 36.10

However, the highlight of the competition for Josh was achieving a place in the 200 IM final. The final itself was a fantastic race and saw him finish 4th clocking an incredible time of 2.04.94 (5sec PB).

Two events, two finals and a Bronze medal in the 50m Butterfly at the English Championships the following week was a great finish to the season for Josh.