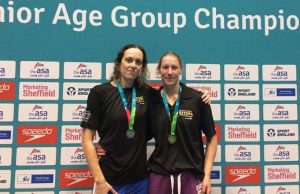 Sophie Casson and Christine Johnson represented Carnforth Otters in the ASA National Masters Short Course Championships at Sheffield’s Ponds Forge, and showed that there are no age limits to success.

Sophie has been an inspirational role model at Otters for many years; she is part of the dedicated coaching team, and a mentor to the talented group of up and coming swimmers.

Sophie entered the Championships as the current world record holder for 400m freestyle in the 30-34 year category, and she had set her sights on re-writing the record books further, despite nursing a hand injury. She did not disappoint, smashing the British and European record for the 200 freestyle in a time of 2.03.31 to take gold, only 7/10ths outside the world record. Sophie said: “I’m a little disappointed not to get the world record, but due to a technical hitch I swam in an  outside lane instead of lane four, so I’m very pleased with the European  record”.

Sophie recorded the fastest time of the championships, taking gold again in the 400m freestyle in a time of 4.16.96, less than two seconds outside her world record; she also added a silver medal to her tally in the 100m freestyle in 57.89.

For Christine, it was her first major swimming competition since 1993, having switched her attention from triathlon only three months ago. She competed in the 40-44 year age group and picked up silver medals in the 400 freestyle and 100m butterfly.

Christine said: “I am so grateful to have been able to swim for Carnforth Otters under head coach Mark Smith, training has been tough but well worth it”.

See the results from the event