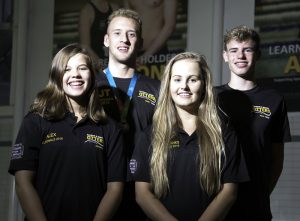 In an exciting end to the swimming season, Carnforth Otters were in their best position for some years, having four swimmers who qualified for the National Championships.

First to swim was Ben Winterburn (15), competing in the National Open Water Championships at Rother Valley, Sheffield. The 26 competitors all started together, completing the 3km course without a wetsuit. Ben finished in a very credible 17th position in his first National swimming event and was first to finish from the North West swimmers.

Next up was Josh Thompson (18), competing in six events at the British Championships at Ponds Forge, Sheffield, as well as in one event at the English Championships. Producing a series of season and personal best times Josh progressed from the heats into the finals in six out of his seven events. Swimming his first PB in 2 years in the 100m Breaststroke (1.04.44) was a great start to the competition, achieving an excellent 5th place finish. This was followed by a string of superb swims in all of his other events. Withdrawing from the 200m Breaststroke final in a busy week’s schedule to focus on the 200 Individual Medley event proved the right decision. Another two 5th place finishes in the 50m Breaststroke (29.42) & 200m IM (2.05.05) as well as 10th in the 100m Freestyle (52.12) and 20th in the 50m Freestyle (24.35) saw a return to form for Josh after a nasty injury earlier in the year.

His last event was in the Open Age 200m Freestyle at the English Championships, where a PB in the heats secured him a place in the final. A fantastic start, excellent turns and a strong finish were rewarded with a PB of 1.53.61 and a Bronze medal to round off a great week’s swimming for Josh.

It was then the turn of the girls to show what they could do. In this, her second year at the English Nationals, Aimee Banks qualified for three events. Swimming solid times close to her PBs in the 100m and 200m Backstroke, she finished in 15th (1.09.83) and 12th (2.30.63) position respectively. Aimee saved her best efforts with a strong swim in the 100m Freestyle heats to qualify for her first National final, a fantastic achievement. Another excellent performance in the final and a time of 1.01.20 gave her a 10th place finish.

Last but by no means least, 15 year old Alex Livingstone qualified for the 200m Backstroke in her first National competition as well this year.

Managing to hold her nerve, Alex showed her true grit and committed right from the start of her heat to clock a time of 2.28.63 and bag herself a place in the final. With a job well done, Alex was able to relax a little more for the final, and delivered another excellent performance to finish in 9th place with a time of 2.27.84