Sophie Casson – the Journey of a World Record Holder 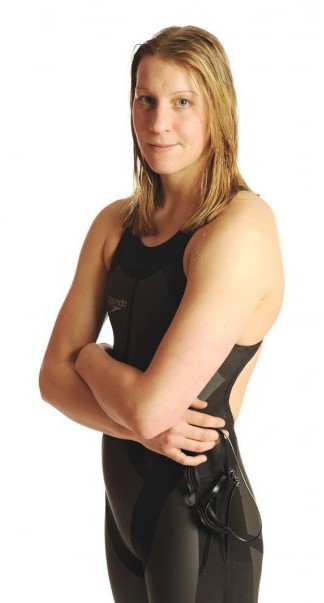 Sophie Casson joined Carnforth Otters back in the early 1990’s, became one of the country’s best distance swimmers in her 20’s and has gone on to break numerous world records in masters swimming as a key and valued member of the club’s performance squad. In this interview Sophie, looks back to her early days with the club, at the hard work, the trophies, and discusses her plans for the future.

Q: What do you remember about your first sessions with Carnforth Otters?

I was 6 or 7 years old and remember my first swim sessions at Carnforth Pool with Elaine Howard and Mike Thoms. I had lots of energy (still do) and didn’t like ballet. They were really good coaches and the sessions were great fun. In my first competition at Age Groups in Fleetwood, I got a Black Badge for coming 3rd in the 50m Backstroke.

Q: When did you start to think – I’m quite good at swimming and might be able to make it to the top level?

I was around 14 when I started to think – I’m not bad at this. I was competing at County’s and getting a few medals. I was enjoying the training, it was a great release for all the energy I had and I found it relaxing. I’ve always enjoyed training even more than racing but I’m very competitive when I get on the blocks.

Q: So how did you transition from National Level to British Team and beyond?

What I learned as moved through the club, is that having a goal and a target has been a crucial driver for me. This helped me to achieve my first win at nationals in the 200m Backstroke at age 18 that opened up the possibility of a scholarship to study at Stirling University. I didn’t get on too well at Stirling and decided to change to Loughborough after 12 months, despite not having financial support. I stayed at Loughborough for a further 5 years studying sports science. In the 2nd year I was ranked third in the country at Backstroke but was struggling to get into the top 2, which would have opened a place in the Olympic team. The key transition was when I was around 22. My coach at Loughborough suggested trying distance freestyle and within 6 months I was third best in the country at 800m and from there I got a place in the Open Water British Team.

Q: What do you remember as your best swim?

That was in South Africa in the Midmar Mile event where I came in the top 5 but didn’t get an Olympic place as Kerry Ann Payne was swimming really well and had won the world championship.

Q: You returned to Lancaster in 2011 and have been Swimming with Carnforth Otters since then – what has kept you going?

Actually in 2011 when I returned, I swam by myself for 6 months and then discovered that I needed to be pushed and returned to swim at the club. It wasn’t long before I was swimming really well again. After all the experience I’ve had at Stirling, Loughborough and overseas, what never ceases to amaze me is what a fantastic club Carnforth Otters is. Since returning, I’ve seen year upon year, swimmers achieving nationals qualifying times with a minimal number of hours in the water. I’m still swimming close to my best times with less than 7 or 8 hours training per week, which involves maybe 30km. I was doing over 80km at university, in some weeks 100km. This shows the quality of what Mark and his team of coaches is delivering. This program has supported me to take my first world record in 2014. Swimming in the 25-29 age group I swam 4:15.54 in the 400m Freestyle. This year I went even faster breaking the 30-34 age group world record with a 4:14.56. Also this year I also broke the 200m Freestyle world record with a 2:02.03 and the 1500m world record with a time of 17:20.02. It’s been a good year!

Q: So to the future – What are your plans?

This year has been tough, I ache everywhere and need a less intense year next year. I certainly want to do more Age Group swimming and would like to try and get to Nationals in 2018. I’m also really enjoying racing in Arena and North Lancs Leagues. I’m still keen to go for more masters records. Masters swimming is getting a higher profile every year and age is not an issue as you just move into a different competition as you get older. I’m really keen to push masters swimming but also to support the older swimmers at Otters who benefit from my advice and experience.

Carnforth Otters, based at Salt Ayre Sports Centre, currently has 225 active swimmers aged 4 years old to 40 years old who compete in local galas, national and international competitions, and both triathlon and pentathlon events. Head Coach, Mark Smith, is supported by 30 Swim England qualified coaches. Carnforth Otters is open to both established swimmers wishing to compete and beginners from 4 years and upwards.