Over 9000 athletes converged on Budapest for the 17th FINA World Masters Championships and amongst the 6524 swimmers were Carnforth Otters’ Sophie Casson and Christine Johnson. 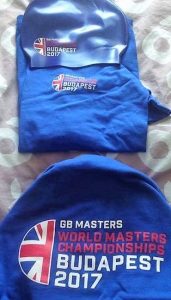 Day 1 saw Sophie competing in the 30-34 year age category in the 800m freestyle and she got her championships off to a fine start; recording the overall fastest time and smashing the European and Championship records with an amazing time of 8:58.94. With less than 24 hours recovery Sophie took to the water again, this time in the 200m backstroke; she claimed another gold medal and a championship record.

Sophie and Christine competed in the 200m freestyle on day 3 and amongst the competitors was an inspirational lady from the USA Maurine Kornfeld a meagre 96 years of age! Sophie bagged her hat trick of golds in another Championship record time of 2:05.97 and Christine, competing in her first world championships, finished in an excellent 8th place in the 40-44 year age category in a time of 2:22.24.

Day 4 saw Sophie putting her stamina to the test in the 200m IM and showed why she continues to be a great motivator to the younger swimmers at Otters’, claiming Silver in a British record time of 2:24.78. Christine put in a fine performance in the 100m butterfly clocking a personal best time of 1:12.99. 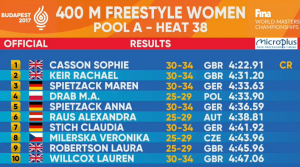 With 2 days of well-earned rest under their belts Sophie and Christine competed in the 400m freestyle. Sophie ended the championships as she began claiming her 4th gold medal gold in another European and Championship record time of 4:22.91. Christine had a strong swim, finishing in 16th place in a time of 5:06.20.