Medals and PBs aplenty for Otters at Blackpool Rocks 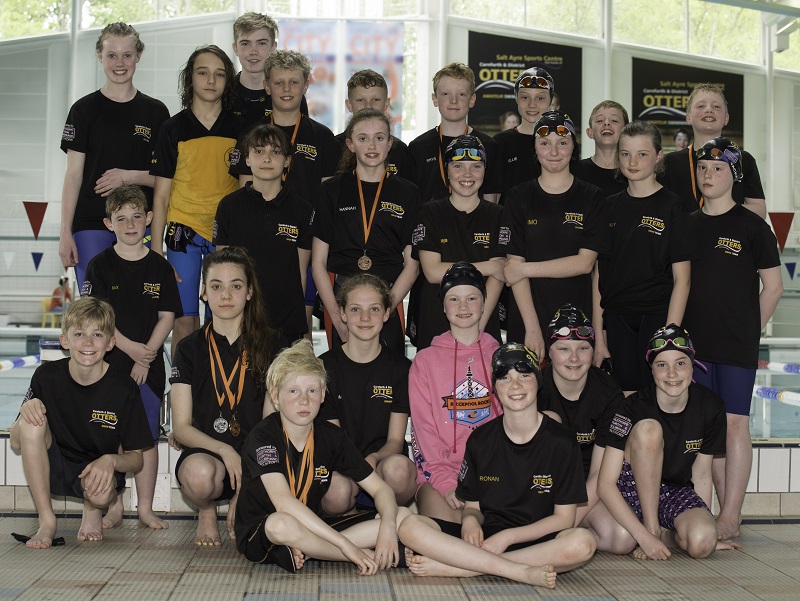 With a tough winter of training at Salt Ayre under their belts, 28 young swimmers from Carnforth Otters travelled to Blackpool Rocks to defend their 2016 visiting club trophy, and put their hard work in the pool to the test against tough competition. Although retaining the trophy was a step too far this year, the team managed a top 6 place that was excellent given the competition from the big clubs, Blackpool Aquatics, Preston, Wigan Best and Oldham Aquatics.

With the club focussing on progression and long-term athlete development, it was great to see so many young swimmers competing in the longer events with determination and confidence against the best in their age group. The 200m events were very popular this year with McKensie Ronson Horrocks (11) swimming a 2:25 and George Cookson (13) a 2:19.50, both taking Silver medals. Just missing a podium spot with 4th places were Rhys Ashton (12) 2:25, Owain Heathcote Jones (11) with a 2:31 and Tom Adamson (10) with a 2:34. Further major improvements in the 200m Breastroke were also achieved by Maia Bishop (11) and Rosie Wallings (11) who both knocked over 15s off their personal best with times of 3:35 with Connor White, McKenzie Ronson Horrocks and George Wilby all putting in personal best swims. In the 200m Backstroke the trend continued with a further 15s PB from Ellie Howley (2:45.31) and further strong PB’s from Maia Bishop (11), Hannah McMillan (11), Tom Adamson (10) and Sacha Robb (11) with McKensie Ronson Horrocks (11) slashing his time for the 200IM (2:51) in addition to the backstroke (2:42). Ellie Howley (12) also pulled her 200IM time down considerably to 2:55. Imogen Sharp(10) had a good weekend, knocking 3 seconds of her 100 Breastroke time and achieving a new personal best of 1.42, she also went on to improve on her 100IM with a good 2 second personal best. Anya White (11) and Rosie Wallings (11) also clocked up impressive PB’s on the 200m Freestyle coming in on 2:50 and 2:47 respectively.

11 year old Molly Moran had her first outing at open competition and achieved a very respectable timeof 38s for her 50 freestyle. Well done also to Kiera Richmond (14) who put in some superb swims to return with a podium position and take the medal tally up to an impressive 26.