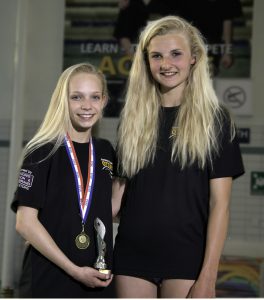 Two Carnforth Otters swimmers, Isabelle Woodman (14) and Emma Whitaker (15) have been setting the Pentathlon world alight over the past few months.

Isabelle Woodman has taken the National under 15’s title for Modern Triathlon.

Emma competing in the U17 category and at the younger end of her age group was also outstanding taking National Bronze a testament to the hard work in the pool and her talent as a multi-disciplinary athlete.

Modern Triathlon involves a swim (100m for Isabelle, 200m for Emma) and a combined run and shoot involving two 800m runs for Isabelle and three for Emma.