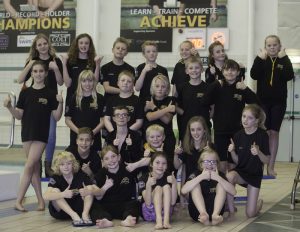 It has been 10 years since Carnforth Otters Microleague Team qualified for the North West Grand Final but this year they did it, an incredible achievement for a small club given tough competition from 8 other elite squads of youngsters within the premier division of the league. Microleague is the main series of competitions for swimming clubs in the North-West region involving teams of swimmers aged between 8 and 12 years old. This year there were 27 teams competing across 3 divisions with each team racing in 4 galas between February and July 2016. By the last gala in the series, our 30 strong Carnforth Otters team pushed the highly ranked clubs Pioneer 79, Blackpool Aquatics, Everton and Garston outside of the top 4 resulting in the young Otters competing in the final against the region’s top clubs, Preston, Leyland Barracudas and Southport. Although the Otters team knew it would be a big ask to beat these big teams, they all swam superbly gaining a respectable 81 points with 10 year old George Wilby and 12 year old Alice Sands winning their individual events and the 10 year old boys Owain Heathcote Jones, Tom Adamson, Mckensie Ronson Horrocks and George Wilby winning their freestyle relay to secure their position as the top 10 year old relay team in the North West.

This result confirms Carnforth Otters as one of the top clubs in the North West for developing young swimmers. It is also a testament to the talent amongst the squad of youngsters that travel to Salt Ayre, Heysham Pool, Carnforth Pool and Lancaster University to train with Carnforth Otters from all over the region. Also, in addition to the boys under 10’s relay team, the under 10’s girls relay team consisting of Anya White, Imogen Sharp, Rosie Walling and Amy Spurr also won a significant haul of points that placed them as the 8th top scoring girls relay team across all the age groups in the competition.

A final mention to the 40 young Otters who competed in Division C for the Carnforth Otters B team. Many of these swimmers would make the A team in other regional clubs and were a credit to their coaches and their team mates. This year the B team achieved a 5th place within Division C, ahead of the A teams from Lytham St Annes, Kirkham and Colne. In terms of the quality of the swimming, the B team was exceptional in both technical ability and speed. Carnforth Otters is now looking forward to the 2017 season with an ambitious expansion plan supported by its sponsor Oglethorpe, Sturton & Gillibrand Solicitors. Given improved access to Salt Ayre via the Bay gateway this plan aims to fill gaps across all its swim teams to support its continued ambition to be top club in the North West.